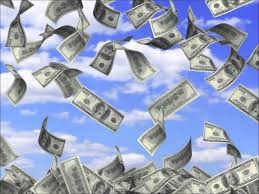 An armored Brink’s truck accidentally scattered money across a northern New Jersey highway on a recent Thursday morning, and as drivers got out of their cars to grab cash there were crashes. A windfall or highway robbery?

I’m driving on the freeway and the armored truck in front of me dropped its cash. Can I pocket the money?

A question few stop to ask.

Especially while the green-backs are still plastered to their windshield.

This article attempts to examine several aspects of this puzzling episode.  In such a situation, are the drivers, in fact, permitted to keep the money?

Hashavas aveidah is one of the first mitzvos we are taught as children.  Finders are not keepers – and lost property must be returned to its rightful owner.  The following paragraphs, however, focus on when you may keep lost property.  The times that finders are keepers.

Shulchan Aruch (C.M. 262:5) states that after a person has expressed that he has given up all hope of recovering lost property, the finder is entitled to keep it.  This principle, called ye’ush, applies even when the finder knows the identity of the person who has lost the object.   Ye’ush, however, cannot be applied when the object has entered the possession of the finder before the owner is meya’aish.

The Chazon Ish (Bava Kama 18:1) expands the scope of ye’ush to include situations where a thought of ye’ush occurs in the mind of the owner.  He writes that no verbal declaration of ye’ush is necessary.

We’ve all been there.  You’re hustling down the street, and a $20 on the ground stops you dead in your busy tracks.  We now know that you must ask yourself, “Was the owner already meya’aish”?

When somebody discovers he has lost property with no identifying characteristics, like money, he is presumed to be meya’aish.  He gives up hope because he has no way of claiming his property.  But the finder can only keep the money if the owner was already meya’aish. How do we determine whether he has even discovered his loss?

Sometimes, depending on the nature of the property, we can presume the owner has discovered his loss and was meya’aish.  Some examples are heavy objects, or valuable items like money.

So next time you come across cash randomly lying in the street, you know you can keep it.  The owner certainly has discovered his loss, and was meya’aish.

From this halacha, the poskim derive that when it is not known for certain that the owner was miah’aish, but there is strong reason to believe so, the finder may assume ye’ush and keep the object.  The question in the case of the armored truck, then, is whether the security guard standing idly by, can be construed as indicating ye’ush on his part.

Rabbi Mordechai Gross (Mishpat H’aveidah 159:17) quotes Rabbi Moshe Feinstein zt”l and Rabbi Yosef Shalom Elyashiv zt”l as saying that a person’s failure to pursue his lost property is not considered ye’ush.  However,  one can argue that perhaps our case is different.

It is clear from a gemara in Bava Metzia (22 a) that when the lack of effort from the owner to pursue his property results in permanent loss, such an instance would certainly be considered ye’ush.

Getting back to our case of the armored truck, imagine the scene of all of the drivers frantically chasing after the fleeting bills.  Indeed, it’s safe to assume that they had no intention of returning the money to the owner.  So, at first glance it would seem that the guard’s lack of effort to recover the money should be considered ye’ush.

Upon careful examination, however, it’s not that simple.  There‘s a discussion among the poskim whether ye’ush of a shomer  (or, guard) is sufficient, or only the ye’ush of the object’s owner allows the finder to keep it.[1]

In conclusion, the case of the armored truck is complex.  Additional principles may apply to this scenario.  So, next time you receive a windfall from an armored truck, be sure to ask a Shayla.