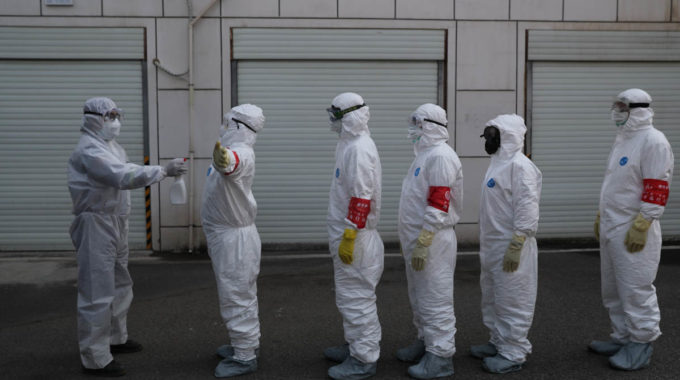 The Great Kanto Earthquake struck Tokyo in 1923 and killed well over 100,000 people. Even today, it remains the worst natural disaster in the history of Japan. At the time, the Chafetz Chaim warned that it would be a tragic error to think that an event so geographically distant from the Jewish People had nothing to do with us. Everything Hashem does in the world is a message directed at Klal Yisrael, and we ignore such messages at our peril.

As the Covid-19 coronavirus wends its way across the globe, having been upgraded from outbreak to epidemic and now chasing pandemic status, we would be wise to ponder that message.

After the tragedy of 9/11, the question arose: If it had been known that the hijacked planes were being deployed as missiles to attack occupied buildings, should authorities have shot down the planes before they could reach their targets? Shouldn’t we kill hundreds in order to save thousands?

A similar question could be posed here: If an infected individual is poised to spread the disease, may he be killed in order to protect the masses if he cannot otherwise be contained?

The Rambam in the fifth perek of Hilchos Yesodei HaTorah says that all the mitzvos are set aside in the case of danger to life because the Torah commands vachai bahem, one is to live by the mitzvos—and not die by them. But in the case of the gimmel chamuros, the three cardinal sins of idolatry, immorality, and murder, yeihareig v’al ya’avor, one must be killed rather than offend.

In the case of idolatry and immorality, this is demanded by the mitzvah of kiddush Hashem, sanctifying Hashem’s name. Murder, however, must be avoided even on pain of death for a different reason entirely: mai chazis. “What makes you think your blood is redder than his, maybe his blood is redder than yours?” One who is ordered to murder another or be killed must desist from carrying out the order, because there is no way he can know that his life is more valuable than that of his designated victim.

Number is not a factor is this calculus: If an enemy surrounds a community and demands that one person be sent out to be killed or all will die, they may not comply. They may not reason that surely the lives of all are collectively of greater value than the life of the one sacrificial lamb they will select.

It would appear, then, that the hijacked passengers may not be shot out of the sky in a bid to save the numerically superior assemblage in the target building. Ain dochin nefesh mipnei nefesh, we may not push aside one soul in favor of another. And the fact that the passengers will die shortly in any case is not a consideration, because the murder of a dying man is still murder.

There is only one case where one life may be destroyed to save another, and that is the rodef or pursuer. We derive this from the ba bamachteres, the case of the burglar in Parshas Mishpatim. It may be presumed that a burglar who is active at night plans to kill the homeowner should he encounter him. Therefore, the burglar’s entry constitutes a threat to the life of the residents, and his pursuit of them may be terminated with deadly force. The logic of mai chazis doesn’t apply, because he brought the situation upon himself (Sanhedrin 74).

A sick man who is approaching healthy people and will infect them is clearly the cause of the threat and thus a rodef. But what if he’s unaware he’s ill?

In Sanhedrin 72 we learn that a fetus that threatens its mother’s life is not a rodef, because mishmaya ka radfi la, they are pursuing her from Heaven. The fetus isn’t pursuing its mother, a natural process is doing so. An abortion is performed to save the mother’s life for a different reason, because the fetus is yet unborn and the mother is born, so the mother’s life is of greater value. Once the baby’s head emerges, his life and hers are equal, and because he is not a rodef, he cannot be killed to save her.

Clearly, a fetus endangering its mother bears no fault. But that is not offered by the Gemara as the reason not to reckon it a rodef. A faultless rodef, like the clueless coronavirus carrier, is still a rodef.

The man who would be selected to satisfy the enemy’s bloodlust in our earlier case is not doing anything to anyone, so he is not a rodef. The passengers on the plane hurtling toward the building are threatening no one—only the hijacker flying the plane is doing that. So they’re not rodfim, either. But it would appear to emerge from the sugya that the virus carrier, witting or unwitting, is.