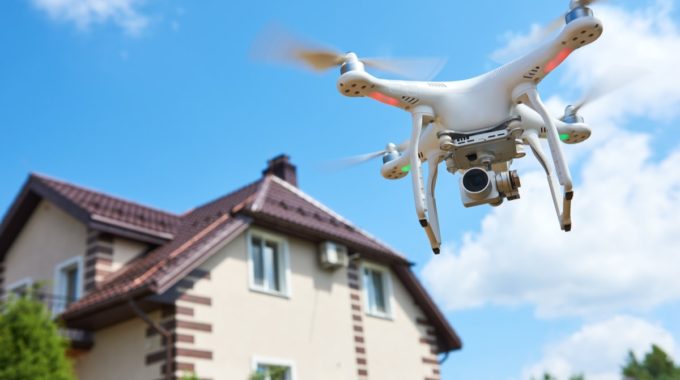 Drones in civilian and military use has proliferated over the last few years and has raised many safety and privacy concerns. In this article we will explore some of these issues from a halachic perspective. Is it permitted to fly a drone over another person’s property if it will infringe on their privacy? It is permitted to stop a drone from flying over one’s property by disturbing its communications or shooting it down? If the law of the land would permit this under certain circumstances, would this affect the halacha?

The Talmud poses the well known question whether infringing on a neighbor’s privacy is considered a damage. The Talmud concludes hezek ri’ah shmei hezek, damage by seeing (i.e. causing a lack of privacy) is called a damage. Therefore, it is prohibited to make windows that overlook a neighbor’s courtyard because it would prevent them from doing chores that require privacy in the courtyard.

Why is simply opening a window in one’s own property considered an act of damaging the neighbor?  Some explain that part of the neighbor’s ownership of their courtyard is the right to perform their household needs there. By creating the window you are partially taking away their property because they are prevented from using it fully.  Furthermore, some point out that the entire question of the Talmud is if creating the window is forbidden, as this may be only considered an indirect damage. However, actually standing at the open window and causing the neighbor to be uncomfortable is a direct act of damage and is certainly forbidden.

We can learn from this discussion that intentionally flying a drone in a way that would inhibit people’s legitimate right to use their property is certainly prohibited.

The Talmud (Bava Kama 28a, CM 383) describes a scenario where a person’s ox is being attacked by another ox. The Talmud says that the owner should not damage the attacker but should pull out his ox from under it. If the attacker gets damaged as a result, he is not responsible.

The Shulchan Aruch HaRav (Nizkai Mamon 5) explains that one should do everything possible not to cause damage to another person’s property, even when that object is causing him damage. Therefore, if it is possible to save his ox without directly damaging the other ox he should do so. The Shulchan Aruch HaRav seems to imply that if the only way to save his own ox would be to directly damage his friend’s ox, in such extenuating circumstances, it is permitted.

However, the Aruch Hashulchan (383) seems to understand this concept differently. The reason why the Talmud permitted ‘pulling out’ his ox from underneath the attacker is because it is not an act of damaging but one of saving. Therefore, if the attacker inadvertently gets damaged he is not responsible. It seems according to the view of the Aruch Hashulchan that it is never permitted to intentionally damage another person’s property even to protect his own property.

The views of the Shulchan Aruch HaRav and the Aruch Hashulchan are important when considering the halacha about damaging a drone to prevent it from invading one’s privacy. First of all, it is never permitted to cause damage to another person’s property to prevent damage, if other options are available. It goes without saying that every recourse must be taken to contact the owner and warn him of the recklessness of his behaviour. If all attempts have failed, there still may be a dispute between the Shulchan Aruch HaRav and Aruch Hashulchan if it would be permitted to directly damage the drone, i.e. shoot it down (assuming that it is legal!). According to the Aruch Hashulchan only an indirect act of protection is permitted, not a direct act of destruction. Putting up a high fence or net that would prevent it from coming in would be permitted, even if the drone may fly into it and become damaged.

The Maharsham (4:140) was asked an interesting question. A neighbor’s animal was repeatedly coming into his field and causing damage. All attempts to contact the owner were futile. Could he put out poison in his field so the next time the animal would come into the field it would poison itself and die?

The Maharsham quoted an earlier responsum of the Chavos Yair. A store keeper killed his neighbor’s chicken because it would constantly come into his store and eat the beans and seeds he was selling. The Chavos Yair ruled that the store keeper was not allowed to do this. He understood that although it is sometimes permitted to take the law into one’s own hands to stop a person from damaging, this is limited to a person not his property. Therefore, if the chicken or animal is damaging due to the neighbor’s negligence, it is not permitted to stop them by damaging or killing them.

However, the Maharsham reasoned that the question about putting out poison may be different than the case of the Chavos Yair. In the case of the Chavos Yair the shopkeeper acted and killed the chickens. That was not permitted. However, putting out poison in one’s own property is much more indirect. As such, it may be permitted. The Maharsham, however, concluded that since the neighbor does not intend to damage but is just negligent, it may not be permitted to cause his animal to die, even indirectly.

Reading in between the lines of the Maharsham we could draw a distinction between whether the drone is being flown intentionally into the property as a menace or out of negligence. If it is being flown intentionally, the Chavos Yair may agree that the drone could forcefully be removed, even if it will get damaged. It is no different than if the person themselves would trespass. Halacha permits using force when necessary to remove a trespasser from one’s premises. However, if it is out of negligence, it is questionable if it is permitted even to indirectly cause damage to the craft.

Law of the Land

The legislation governing the use of civilian drones is only beginning. What effect could it play in terms of one’s halachic rights and responsibilities?

Rabbi Moshe Feinstein wrote (IGM CM 1:104) that it is permitted to engage in sports that may cause damage to the other players because the players agree to this when they voluntarily engage in the sport. Likewise, many contemporary Poskim hold that we follow the secular laws when it comes to liability in motor vehicle accidents. This is because legally all drivers must have insurance, and therefore, when one drives a car he is submitting himself to the law of the land. Therefore, in the case of a collision the one who was damaged has the right to claim damages to the insurance company even if he may not be entitled to payment according to halacha.

In a similar vein, if the secular law would allow certain actions to be taken against a drone that violates one’s privacy, it is possible that halacha would recognize them as well. When one flies a drone they are submitting themselves to the law of the land and one who exercises a legal right cannot be held liable according to halacha.

Halacha clearly recognizes the importance of respecting privacy. As such, the usage of drones in a way that infringes on these legitimate rights is certainly prohibited. The recourses that a person may take if a drone consistently violates ones privacy are not clear. If the drone is intentionally being flown in such a way, and the intervention is indirect or will cause little damage, it should be permitted. However, if the flyer does not intend to be a menace, it is questionable what forms of recourse are permitted. The developing legislation on civilian drone usage should play an important role in how drones may be used and which recourses may be taken according to halacha.

May One Get engaged During the Three Weeks? Yes, one may get engaged throughout the…