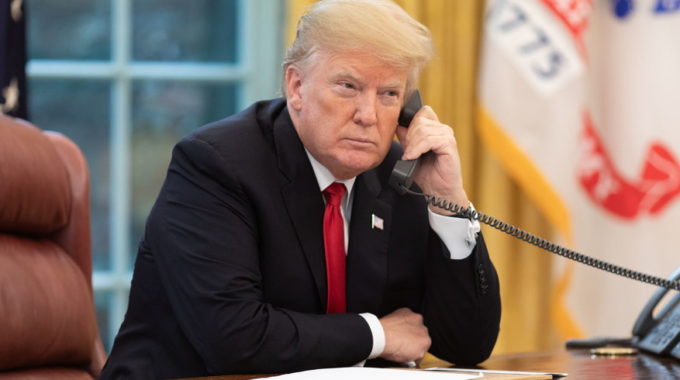 “I would like you to do us a favor, though” — are what triggered the House impeachment inquiry that has imperiled his presidency.

Trump was accused of committing “bribery” by seeking to use U.S. military aid as leverage to pressure the Ukrainian government to conduct investigations that could politically benefit the president. Half-way around the globe, Israeli officials finally indicted PM Benjamin Netanyahu on bribery charges of his own, after years of lengthy – and controversial – investigations. It seems like democratically elected leaders the world over are subjected to extreme scrutiny by the opposition for allegations of abuse-of-power or bribery – an impeachable offense.

Is a public official, let alone the president, allowed to ask for favors? What if they are not conditioned on anything but will just be accorded high-priority? In this article, we will examine the various limits and applications of this prohibition.

The Prohibition of shochad – Bribery

The Torah warns a Dayan not to accept bribes, as the Pasuk says: “And thou shall not take bribes, as bribes will blind the eyes of the wise and distort the words of the wise…” The Shulchan Aruch (C.M. 9:1) introduces this Halacha in the following manner: One should be very, very careful (me’od, m’eod) – an expression found in few places in the Shulchan Aruch. The Gemara in Kesubos asserts that this prohibition applies even when the bribery is given to acquit the innocent party or convict the guilty party.

The Chazon Ish in Emuna U’Bitachon explains this phenomenon: “shochad is a special concept… it carries a special power to blind the eyes of the wise which is embedded in the very creation of the world… in addition to the nature of bribery to blind the eyes of the wise, it carries an impure power (Koach HaTum’ah) to stuff the heart and put wisdom to sleep… the Dayan is no longer protected by his wisdom…” This would explain why even the wisest and most objective Dayan would still be warned against accepting even the most minute form bribery.

The Gemara in Kesubos (105b) expands the concept of shochad to include the slightest favors. For example, the Gemara says that there are instances in which a Dayan who has an item on loan from someone may not adjudicate his Din Torah (see Shulchan Aruch ibid.). Furthermore, the Gemara relates that Ameimar, one of the Amoraim, was once sitting in a Din Torah when a feather landed on his head. A nice man shooed the feather away. Ameimar asked the man what he was doing there, and he answered that he wanted to bring a Din Torah in front of Ameimar. Ameimar told him that he wouldn’t be able to be his Dayan because of this small favor.

The Rishonim debate whether these cases fall under the prohibition of shochad or whether it is just a Middas Chasidus (a pious measure) to refrain from sitting on such a Din Torah. Tosafos (Keusbos ibid.) understand that it is only a Middas Chasidus not to sit on a Din Torah if one has received a small favor, while the Rambam (Hil. Sanhedrin 23:3)- according to the understanding of the Bais Yosef – maintains that it is a violation of the prohibition of shochad. The Bach adds that it seems that the Tosafos in Sanhedrin take a third position, and distinguish between doing a favor in connection with the Din Torah which is forbidden, and just reminding the Dayan of a favor done in the past, in which case it is not forbidden but rather commendable to refrain from being the Dayan.

The Chukas HaDayonim (cited in Pischei Teshuva) writes that in the case of a slight favor, all would permit one to sit if there are two others with him. To the other extreme, some Poskim write that if the favor was done in front of the other party, then it is forbidden according to all opinions, as it causes the other party to stumble and lack confidence in its arguments.

The Pischei Teshuva, cites the Birkay Yosef who discusses a Dayan who receives free medical treatment from one of the parties. The Devar Shmuel (54) distinguishes whether the free treatments were given long before the Din Torah arose and will continue after it or whether they started around the time the claim arose. In the former case there would be no prohibition of shochad although there may be an issue of judging an ohev (close friend, see C.M. 7), whereas in the latter case, it would seem to be classified as shochad. The Birkay Yosef disagrees and maintains that both examples would violate the prohibition of shochad. If, however, the Dayan pays the doctor for his services, there would not be a prohibition of shochad, although it may be best for the Dayan to refrain from judging his personal doctor.

Other Figures of Authority, Bnai Noach

Is the prohibition of shochad only on a Dayan? How about a powerful or influential figure, such as a governor, fund trustee or school principal? The Pilpula Charifta (on the Rosh, Sanhedrin 3:17) as well as the Chida and the Aruch HaShulchan maintain that all officials with power are subject to the Torah prohibition of shochad. The Kli Chemda (Devarim 16:18) adds that this would also apply to police officers. The Chasam Sofer in a teshuva (160, cited in Pischey Teshuva 8:2) and others, maintain that there is a prohibition to accept money to appoint public officials.

The Poskim (cited in Pischay Teshuva 9:3) argue whether there is a prohibition of giving shochad to a Ben Noach (non-Jew) who is also commanded to establish a justice system. The Tumim argues that just like it is permissible for a Ben Noach to judge a relative (which is forbidden for a Jew) so too shochad is permitted. However, the Chasam Sofer and the Divrey Mishpat cite the Ramban in Parshas VaYishlach who maintains that the prohibition of shochad also applies to a Ben Noach. The Shoel U’Meshiv and others distinguish between one who gives shochad to a Ben Noach to skew justice which is forbidden, and one who gives shochad to ensure that justice is served (which is still forbidden with regards to a Dayan).

Based on the aforementioned sources, it would seem that there is a prohibition of shochad to bribe a public official, although there may be a leniency when the desired outcome is the just and proper outcome and the judge is a Ben Noach who is not meting out a Din Torah. [It is interesting to note, that the President of Ukraine, Mr. Zelensky, is Jewish, while President Trump is not!]