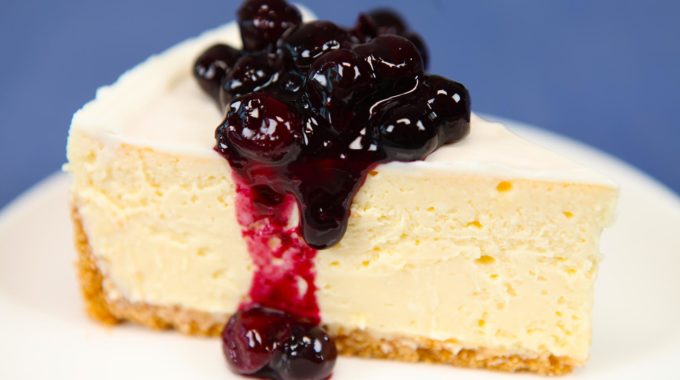 Can one satisfy the minhag of consuming dairy food on Shavuos by eating cheesecake after Kiddush on Shavuos morning?

The Darchei Teshuva recommends this method to fulfill the minhag of eating dairy on Shavuos. However, there is an issue which needs to be dealt with.

The halacha is that one can fulfill the requirement of Kiddush b’makom se’udah (Kiddush in the place of one’s meal) by eating at least a k’zayis of Mezonos food following Kiddush (see MB 273:21). The problem is that many types of cheesecake have very little flour, and one does not typically consume a k’zayis of the dough or flour part of a slice of such cheesecake in the requisite period of k’dei achilas p’ras – which according to Rav Moshe Feinstein, zt”lwould be under 3 minutes (Igros Moshe 4:41). Thus, cheesecake with minimal dough/flour content would not seem to qualify as sufficient for the amount of Mezonos food one would have to eat after Kiddush.

Additionally, even though the bracha rishona for cake and pie is Mezonos, there is an exception when the flour or dough part of these desserts serves merely to hold the filling or fruit in place and is not intended to provide flavor (OC 208:2). Some cheesecakes are virtually all cheese, and they have a paper-thin layer of tasteless dough which merely keeps the cheese in place. This situation would warrant reciting a “Shehakol” and would likely not enable one to fulfill the requirement of Kiddush b’makom se’udah (see OC 208:9 and MB ibid. #45).

Should one wish to have cheesecake after morning Kiddush, the solution would be to either purchase a cheesecake that has sufficient dough/flour to eat a k’zayis worth within the shiur of k’dei achilas p’ras, or to also eat, along with theMezonos or Shehakol cheesecake, another Mezonos food (e.g. cookies, pastry, or cake), making sure to have a k’zayis of the Mezonos food in a period of k’dei achilas p’ras, as above.